Bamberg is a splendid place for the beer drinker to visit, but few of us ignore the other attractions of this 100-year old city, particularly the wonderful architecture. Bamberg was one of the few cities of Germany not to suffer major destruction in the Second World War, However it did not escape entirely and in the closing months of the war serious damage was done by Allied bombing and shelling. Fortunately most of the major monuments and landmarks escaped damage but over 300 buildings were totally destroyed. Amongst the buildings destroyed early in 1945 were three of Bamberg’s (then) 19 breweries– Kleebaum, Kaiserwirt and Wilde Rose.

Kleebaum, situated at Untere Kaulberg 7 near to the Obere Pfarrkirche, was totally destroyed in the air raid which took place about 1pm on the afternoon of February 22 1945. This brewpub dated back at least to the middle of the 18th century and occupied a fine building with a beautiful Baroque frontage. A Dr. Schneidmadl mourned the loss of his local in an article in the Bamberg Yearbook in 1950:

“First of all the splendid hosts, the passionate hunter and violin player Franz Müller and his genial wife Margarete deserve an appreciation. One, a tremendous manifestation of the art of winning hearts, the other an upright citizen's plump and comely wife - both live on in my memory. They were people of the old school, held in high esteem, who had respect for tradition but nevertheless were not shut off from new practicalities. To see this, you only had to go into the spick and span, paneled kitchen in the courtyard, where I often took away roasts of venison, deer and rabbit. I also took out from the "Schenke" the requisite "Mass" of "ungespundenes", that all Bamberg's "Bierkiesers" were keen on. When "ungespundenes" was served, the potbellies of Bamberg did not bother to make the ascent of the Kaulberg and the pub with the original windows on the courtyard was overcrowded.

I have been told that as a schoolboy at the turn of the century I was a regular but naturally only at the "Gassenschenke" (serving counter on the street), where every two days I had to collect three half litres. Evening after evening I leapt or skipped, whistling, with a pot-bellied glass mug to Röckelein or Kleebaum, where the "double" and "single" beers were already tapped - a litre of "double" formerly for 24 Pfennigs, later for 26 Pfennigs - the landlord then filled my mug full with "double" from his copper jug.

Mind you, the locals would not go for “single” beer. Asking for anything other than “double” would have been an offence. But the landlord of the Kleebaum had another requirement which was an affront to the Bamberg beer drinker, "När sich kan Schlappgroschn gem!" i s a well-known saying of Bamberg people*, and means “don’t be shown up for not having enough money”.

As the faster child I was always early and had to wait for the time-consuming procedure of tapping the barrels, in Summer the barrels were kept in the cellar, in the cooler Spring and Autumn they stood in the entrance hall, and in severe Winter they waited for tapping in a circle around the old fashioned tall "cannon" stove.

The full barrels came thundering in from the entrance hall through a little doorway under the shelf of the "Schenke", which was fitted with a brass plate and shone with polish and cleanliness. The empty barrels were rolled out in the reverse direction and piled up in the hall. Here also stood one or two of the typical Bamberg beer wagons. The barrels, the stables, the kitchen and the brewery mixed together in an indescribable aroma that I can still smell today. I never experienced quarrels, brawls or stabbings in this genuine, well-run brewpub.

In the single large bar – there was no Nebenzimmer - stood great tables with polished maple tops. The bar had three windows overlooking the street, which were as long as I could remember hung with old grey shutters. During the day one couldn't see out of the dark bar so curtains were superfluous. Naturally each guest had a tin-lidded beer mug that belonged to this distinguished brewery. The beer mats were top quality felt and not poor quality cardboard. Next to the bar was an armchair for the licensee’s wife, so she could keep an eye on proceedings, and this completed the cosy interior of the room. Nearly everybody played “Schafkopf” (literally: sheep’s head), the most popular Bamberg card-game.”

Franz Müller died in 1939 and his son Rudolf took over the business. In 1943 brewing had to cease because of the exigencies of war. Dr. Schneidmadl who as an adult had remained a regular at Kleebaum, completes the story:

“I could not have foreseen that simple pleasures in this pub were soon to cease, in the last months before the catastrophe I played card games or chatted at the "Stammtisch" of the gardeners. My diary for 21 January 1945 reads "evening drink at the Kleebaum. The little barrels were returned under the "Schenke" to the hall. The simple shutters, the iron stove with its long chimney, the scrubbed maplewood tables and four parties of "Schafkopf" made me feel at home. I talked about the good old days with friends of my father, the coachman Müller (88) and the cidermaker Scharnagel (72)." One month later, smoke arose from a tall heap of rubble. Today, five years after the destruction still nothing is standing of this ancient Bamberg place of joyful living. The gable end on the narrow Kleebaumgasse stares to the heavens. One prays for the resurrection of this vanished, hospitable brewery refuge.”

Shortly afterwards, Dr. Schneidmadl’s prayers were in part answered and a temporary pub was erected in the ruins, run by Rudolf Müller’s wife Eva. But Kleebaum never brewed again. Following a fire in 1977 the pub was demolished and an apartment block now occupies the site. 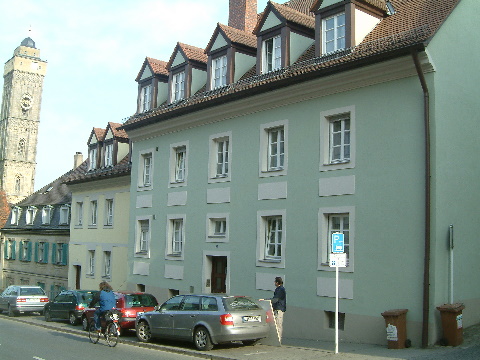 This article is based on information taken from the Bamberg Year Book for 1950 and I am grateful for the assistance given by my friends in Bamberg in translating the article. The wonderful book Bamberg- Die wahre Haupstadt des Bieres by Christian Fiedler filled in gaps in the story.

* This saying is no longer current in Bamberg. Translating it proved a challenging experience!

Schenke : in traditional Bamberg brewpubs, a serving hatch used for takeouts and by those drinking in the courtyard.

Nebenzimmer – an additional guest room or bar, used when the main bar is full.

Ungespundenes – now usually called Ungespundetes. Franconian beer specialty which is vented to the atmosphere when lagering and has low carbonation.

Stammtisch – table reserved for the regulars in a pub.