A Visit to Annafest 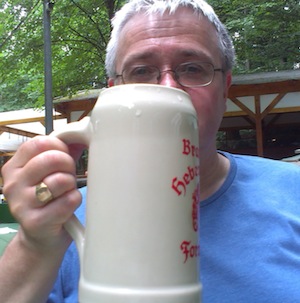 Paul Bailey lives in a small Kentish market town called Tonbridge, which has its own medieval castle and several old pubs. A regular visitor to Germany, he recently discovered the beery delights of Franconia. He and his son attended the Annafest this past summer. Next summer? Sandkerwa in Bamberg.

My son and I have recently returned from a week’s holiday in Franconia (the northern part of Bavaria). We based ourselves in the picturesque town of Forchheim; a place of some 20,000 souls, situated roughly halfway between Bamberg and Nuremberg in the valley of the River Regnitz. Forchheim’s main claim to fame, apart from its four breweries, is Annafest, a ten day long beer and folk festival. This article describes our own personal experiences of the event. 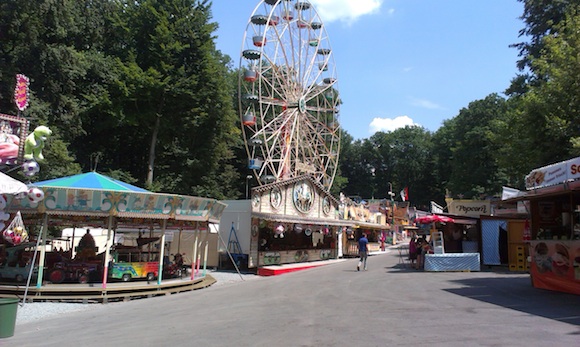 We attended Annafest on three separate days (Tuesday, Thursday and Sunday), with breaks in between our visits to allow ourselves to recover. By recover, I don’t mean we got so drunk, or were left with king-size hangovers, that we were unable to function the following day, but with litre (Maß) mugs the only measures the beer was served in, (unless one wanted a wheat beer that is), it was quite easy to over-indulge, albeit unintentionally! What’s more, the beer on sale was the Annafestbier, which weighs in with an abv of around 5.7%, or more! The day’s in-between did afford a break though from the festivities and allowed us to explore other parts of the area. This was as much a part of our holiday as visiting Annafest was.

On each visit we travelled the short distance from the town centre by shuttle bus, alighting at the fairground at the bottom of the Kellerwald. Depending on the day and the time, the buses were sometimes more crowded than at others, although it was a bit disconcerting to be amongst a bus load of school kids heading up to the Kellerwald; disconcerting until one realises that 16 years is the minimum legal age for the consumption of beer in Germany! Possibly a lot of these youngsters were heading up for the funfair and associated amusements, rather than the more serious business of visiting the Kellers, but it’s nice to report that Annafest is very much a family-oriented event with something to keep all age groups amused. 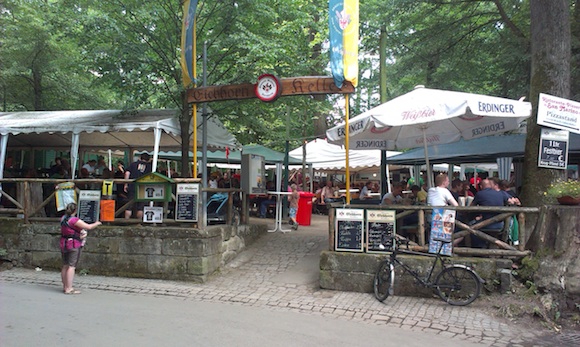 On each occasion we visited three different Kellers, which meant three litres or nearly six pints each over the course of the day. We paced ourselves though and took our time, savouring the tasty, potent beer, served with one notable exception, in tall, ceramic stoneware mugs. For the record we visited the following Kellers: Tuesday -Stäffalakeller (Wolfshöher), Schlöslakeller (Hebendanz) and Lo?enbräukeller (Lo?enbräu – Buttenheim); Thursday – Greiffkeller (Greiff), Eichhornkeller (Eichhorn) and Weiß-Tauben-Keller (Rittmayer-Hallendorf); Sunday – Hoffmannskeller ((Monschof-Kulmbach), Nederkeller (Neder) and Nürnberger-Tor-Keller (Wolfshöher). 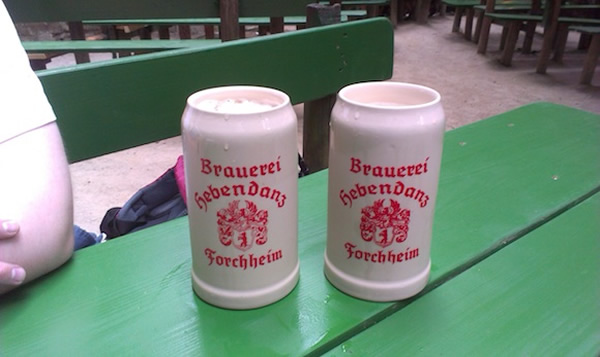 Of the beers drunk, Hebendanz and Neder (both Forchheim brewers), stood out above the rest, although the beers from the town’s other two breweries, Eichhorn and Greiff were also very palatable. The beer from Kulmbach giant, Monschof, was different from the other local beers in that instead of the darker, Kellerbier common in Franconia; it was a golden, Helles-style beer, served in glass Maß, rather than the stoneware ones used by virtually all the other breweries.

The beer I was least impressed with was Wolfshöher, a regional concern with expansionist designa, based in the village of the same name, near Neunkirchen. The company has an unduly large presence at the Kellarwald, due to its takeover, and closure of Forchheim’s fifth and largest brewery, Bräuhaus Forchheim. The brewery buildings, now standing empty and forlorn, were only a stone’s throw from our rented holiday apartment, but there was some sign that work was taking place on the site, to convert part of the brewery into residential accommodation. 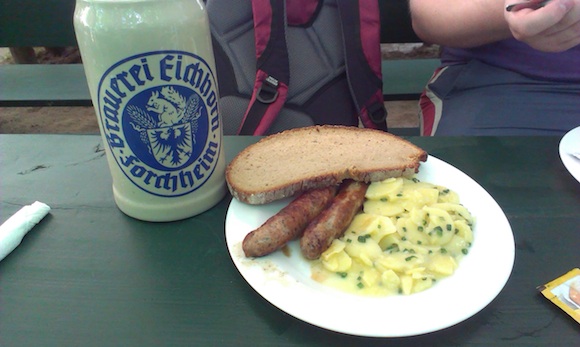 There was plenty of food available to help soak up all of this beer. Most, if not all Kellers offered various cooked meals, ranging from sausages and potato dumplings to the usual knuckles of pork and roast chickens. There were also various food stalls grouped along the paths between the various Kellers, offering a variety of snacks, both savoury and sweet. This, interspersed with the live music at some of the Kellers, and the fairground attractions at the bottom of the hill, combined to produce a fantastic atmosphere.

On the last day we also went along to the Winterbauerkeller (St Georgen Bräu), but they had stopped serving for a while when we arrived. This was sometime around 7pm, and the wind had really started to blow up and a storm was threatened. Shortly after, sirens began to sound and we were old the festival would be closing for the evening, due to an adverse weather report received from the town authorities. Once back in Forchheim we found out the reason for the authority’s caution. Several years ago, during similar stormy conditions, a branch had blown off one of the trees and fallen on a girl, crushing her to death. They were taking no chances with something similar happening again, and with the Kelarwald on high ground, covered with acres of mature trees; one could quite understand the reasons behind their decision. It was a bit of an anti-climax and not quite how we would have wished our last evening at Annafest to end, but we managed to get a meal, plus more beer back in the town, so at least we didn’t go hungry (or thirsty!).

Actually, managing to get a drink plus an evening meal in Forchheim proved a lot harder than one would think. The trouble is most pubs and restaurants close early whilst Annafest is on, with some not bothering to open at all. Everyone in the town it seems wants a piece of the action up on the Kellerwald. The landlord of our rented holiday apartment had warned us about this on our first evening in the town, but we did manage to find a few places open. Pride of place must go to Gasthaus “Schwanne”, an impressive-looking, stone-built pub overlooking Forchheim’s Paradeplatz, and with a small beer garden at the front (beers from St Georgen Bräu and Pottensteiner), and also Gasthaus Fäßler, a cosy pub-cum-restaurant on the opposite side of the square, (Wolfshöher beer, but good food and very busy). One pub, Brauerei Neder, was also open, and we popped in there a couple of times for a nightcap, plus a chat with the friendly locals. 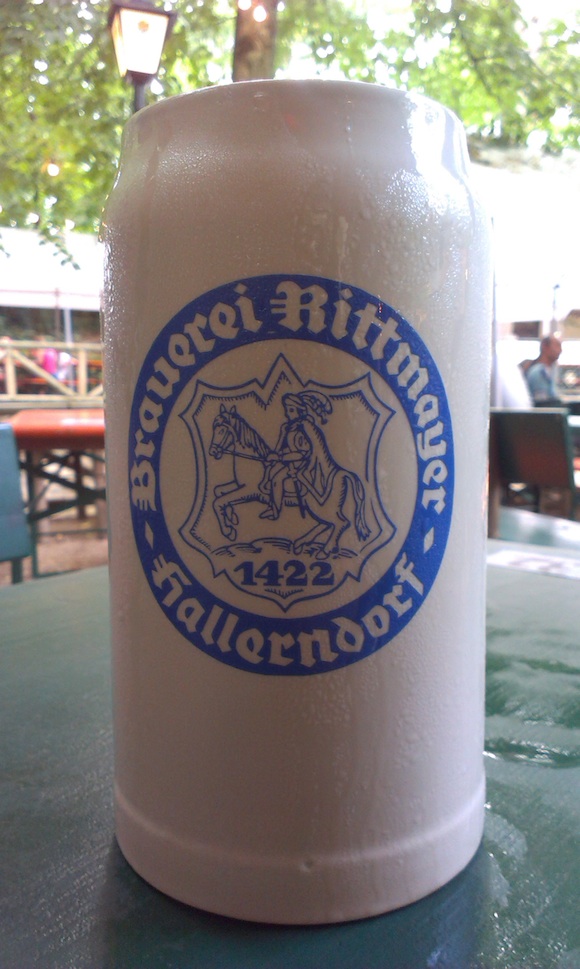 To sum up, Annafest is very much an event which involves the whole town, plus quite a bit of the surrounding area. On those days when we didn’t attend, we couldn’t help noticing the full trains depositing expectant drinkers at the town’s station, and the crowded buses transporting them up to the Kellerwald. As I said earlier, the festival appeals to all ages, and it was good to see young people enjoying themselves, quaffing the beer and all without any signs of trouble.The party of English beer enthusiasts that we bumped into in Bamberg, were also very impressed with the event, saying how much better it was than Oktoberfest, and how much cheaper too. A Maß of Festbier cost €7.40. I don’t know how much the same measure of beer will be at Oktoberfest this year, but I wouldn’t mind betting it will be approaching the €10 mark. Obviously Oktoberfest is internationally renowned and attracts people from all over the world. Annafest is by nature much more a local’s festival, but it is none the worse for that. We are certainly glad we made the effort to get along to it.

Ps. some of the locals in Brauerei Neder were complaining about the beer price up on the Kellerwald. Mind you, with the pub charging just €1.90 per half litre, (almost half what one was paying at Annafest), they did have a point!